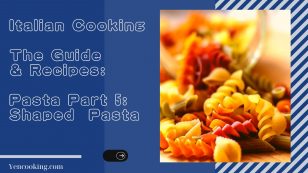 Shaped pasta is available in many different sizes and specific shapes. Shaped pasta is generally found dried. The smaller sizes work well with a simple sauce but most shaped pastas can be paired with a chunkier sauce because they are sturdy enough to hold up with the other ingredients. They are also used in pasta salads and casseroles.

Fusilli, commonly known as Rotini in the U.S., are a variety of pasta that are formed into corkscrew or helical shapes. The word fusilli presumably comes from fuso, as traditionally it is “spun” by pressing and rolling a small rod over the thin strips of pasta to wind them around it in a corkscrew shape

Simple yet spectacular, this fusilli alla Caprese requires just a handful of ingredients, comes together quickly, and is delicious hot or cold.

Orecchiette – Cook for 9 to 12 minutes

Orecchiette are a pasta typical of Apulia, a region of Southern Italy. Their name comes from their shape, which resembles a small ear.

This simple orecchiette pasta with broccoli gets lovely flavor from white wine. Skip the cheese to make it vegan, and use gluten-free pasta to make it gluten-free.

Farfalle are a type of pasta/noodle commonly known as bow-tie pasta or butterfly pasta. The name is derived from the Italian word farfalle. In the Italian city of Modena, farfalle are known as strichetti. A larger variation of farfalle is known as farfalloni, while the miniature version is called farfalline

Creamy Mushroom Farfalle Pasta is a simple, easy to make meatless Italian dinner of mushrooms, scallions and seasonings tossed with noodles in a creamy parmesan sauce.

Garlicky broccoli and cavatelli just like my mom used to make: a fast and easy dish loaded with garlic and Parmesan cheese!

Strozzapreti are an elongated form of cavatelli, or hand-rolled pasta typical of the Emilia-Romagna, Tuscany, Marche and Umbria regions of Italy as well as in the state of San Marino. The name is also used for a baked cheese and vegetable dumpling, prepared in some regions of Italy and on the French island of Corsica

A rich and creamy pasta sauce made with a simple marinara, cream, and Parmesan cheese. Tossed with littleneck clams and strozzapreti.

Conchiglie, commonly known as “shells” or “seashells”, is a type of pasta. It is usually sold in the plain durum wheat variety, and also in colored varieties which use natural pigments, such as tomato extract, squid ink or spinach extract. The shell shape of the pasta allows the sauce to adhere to it

Casarecce originates from Sicily, and are short twists of pasta, which appear rolled up on themselves

A recipe for a delicious walnut sauce

Campanelle, is a type of pasta which is shaped like a cone with a ruffled edge, or a bell-like flower. It is also sometimes referred to as gigli. It is intended to be served with a thick sauce, or in a casserole. In Italian, campanelle can also refer to “handbells.”

Gemelli are a type of pasta. The name derives from the Italian word for “twins”. Gemelli are not twin tubes twisted around one another, as they may appear to be, but rather a single s-shaped strand twisted into a spiral