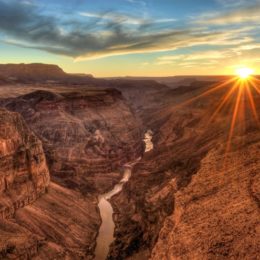 Arizona is located at the West territory of North America, bordered by Utah at the North, New Mexico at the East, Mexico at the South, Nevada and California at the West.  It is an inland state where there are only lakes and rivers, as Lake Mead and Colorado River are the major ones.

The main industry that runs the economy for Arizona is agricultural productions and follows by the mining industry.  There are 53% of crops production such as lettuce, cotton and hay; along with that, livestock is 47% that includes calves and cattle.  Lettuce is the main crop which consists about 20% of total crop production.  As for the mining industry, copper is the key mined product.

Grand Canyon is situated at the Northern Region of Arizona, with unbelievable natural landscape. It shows a stunningly beautiful of natural creations all around.  Late afternoon sun shines on the canyon walls bring out amazing colors from red, orange and yellow that is the attraction of the land.  There are two great locations to view the Grand Canyon; most visitors see the views at the South Rim.  Apart from that, the North Rim has different scenery but the path is not accessible during winter.  Visitors can have luxury tour on a helicopter to view the unforgettable scenery of Grand Canyon from top.  Adventurous visitors can join groups for hiking, rafting and mountain biking.

Glen Canyon is about 110 miles away from Grand Canyon; it is near to Lake Powell at the North of Arizona. Colorado River is bordered by the Canyon Dam and Lake Powell in the year 1956 and 1964.  Apart from that, Glen Canyon is surrounded with stunning stone walls in the deserted landscapes. Wahweap Marina is the biggest marina with only seven miles away from North of Page. It is a great location for discovering the entire area.  Moving down to the South, there are guided tours one can joined to explore Antelope Canyon, which are the most popular attractions, where the visitors can walk in between narrow path with the beam of light penetrates from the top, shines on the red walls and creating these amazing views into the canyon.  This known for the best spot by photographers and majority of those pictures are seen on many postcards or art galleries.

Havasu Falls is located just 11 minutes away from Supai and it is a beautiful fall with clear bluish green water.  The unique creation of forked shape Havasu Falls was created by two falls with heavy flows.  Along the Havasu trails, visitors can visit Mooney Falls at the same time too.  Some Havasupai Tribes live in an isolated life in Havasu Creek.  They basically just survive by farming activities and tourist trade.  This special valley has numerous of waterfalls and travertine rock is carved into basin shape that turn out to be the natural bathing pool place.

Visitors can plan their itinerary to the Northern East and to visit the Monument Valley as well as Canyon De Chelly at the same day.  Both destinations are just 100 miles away from each other, which can be time and cost effective for the day.  The Monument Valley is overlaps on the border of Arizona and Utah, with amazing landscape such as dramatic buttes, sand dunes and jagged rock creation.  The Monument Valley has been on many famous movies’ backdrop in the 80s.  There are options to walk through the valley, either by driving or join a guided tour.  Moving to the East, Canyon De Chelly is a National Monument with stunning cliff dwelling that is one thousand feet deep.  There are more than hundreds of cliff dwellings but Spider Rock and White House is the most well-known which was discovered back in 1849.

There are a few important attractions of Phoenix City, namely Goldfield Ghost Town, Heard Museum and Sedona Town, at the Northern of Phoenix.  First start with Goldfield Ghost Town, which was the busy town of gold mining back in year 1892 and it was located close to Superstition Mountain.  Visitors can visit the town and understand its glory period. Do not forget to join the underground mines tours while you are there.

After the half day tour to the Ghost Town, the next attraction is the Heard Museum that showcases more than four hundred items of artworks by Native American.  Those display items are jewelry, sculptures, paintings and photographs, textiles and Kachina dolls.  Apart from that, visitors can involve in special hands-on activities such as pottery and basketry.

In the next morning, head to Sedona Town, with just 45 minutes drives from Phoenix.  It is a wonderful town encircled by red rock mountains with fantastic views from the main highway.  Visitors can enjoy the outdoor activities such as hiking and mountain biking.  There is also a jeep tours which can take you around on an expedition.

Time for food! There is so much great food at Arizona, ranging from snacks until main course meals.

Cheese crisps are indeed for cheese lover. Tortilla is covered by shredded cheese along with butter and then toast like a pizza until crispy.

Chimichangas is a word from Mexico and that is deep fried flour tortilla with fillings of rice, dried or marinated meat or chicken, cheese wrapping into a rectangular size pocket.  It is normally serve with sour cream, salsa sauce, or guacamole.

Menudo is just so famous in Arizona, it is a Mexican soup made with beef stomach in broth and red pepper as the based.  Again it is usually eaten together with breads or corn tortilla.

Navajo Tacos is also known as Indian Taco.  It is not the normal tacos that use corn or flour tortilla as the wrap, but it uses fry bread as the based.

Raspados or shaved ice is a great dessert for summer, it is mixed together with condense milk and flavorful fruit juices making it the best treat around!

Tamale is originated from Mesoamerican dish that made by corn-based dough and wrapped by banana leaf.  Tamale is ready to cook after it filled with cheese, vegetables, and meat.  Do remember to remove the leaf before eating though.