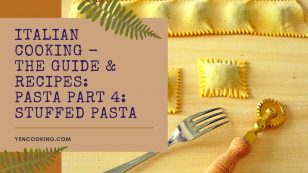 Stuffed pasta consists of fresh pasta sheets that are stuffed with a filling. After the filling has been added, the pasta sheets are folded over and sealed, or another sheet is placed on top and the edges are sealed. Some sheets are folded over the filling and then twisted to form special shapes. Stuffed pastas are formed from sheets of different shapes, such as squares, rectangles, and triangles. They are stuffed with a variety of fillings, which consist of a mixture of ingredients, such as meats, cheeses, herbs, mushrooms, and vegetables. Stuffed pastas are first cooked and then generally served with a light sauce. They can also be served in a broth, added to a baked dish, or added to a salad after they have been cooked.

Ravioli- Cook for 4 to 9 minutes

Ravioli are a type of pasta comprising a filling enveloped in thin pasta dough. Usually served in broth or with a sauce, they originated as a traditional food in Italian cuisine. Ravioli are commonly square, though other forms are also used, including circular and semi-circular

Here is how to use Ravioli mould:

1) dust the working tray with flour

2) lay a thin layer of pastry on the tray

3) press in the holes

4) fill the holes with the filling, without overfilling

5) cover with another layer of ravioli dough, which should lay flat all the way across the mould

6) using the rolling pins or your fingers, press, close and cut the ravioli

7) overturn the tray to let the ravioli come out

Tortellini – Cook for 4 to 9 minutes.

Tortellini are ring-shaped pasta originally from the Italian region of Emilia. They are sometimes also described as “navel shaped”, hence their alternative name of “belly button”, and bear a strong resemblance to a large wonton

An easy, delicious recipe for Cheese Tortellini in garlic butter sauce. Whether you want a hot appetizer for a party or a tasty, comforting weeknight meal option, double the batch because everyone is going to love it! Use refrigerated or frozen cheese tortellini; either way, it’s ready in 15 minutes or less!

Agnolotti is a type of pasta typical of the Piedmont region of Italy, made with small pieces of flattened pasta dough, folded over a filling of roasted meat or vegetables. Agnolotti is the plural form of the Italian word agnolotto.

This is a classic Italian agnolotti recipe that normally uses chicken or rabbit for the filling; feel free to use these meats. Serve this filled pasta with a simple brown butter, sage and some nuts

Maultaschen is a traditional German dish that originated in the region of Swabia. It consists of an outer-layer of pasta dough which encloses a filling traditionally consisting of minced meat, smoked meat, spinach, bread crumbs and onions and flavored with various herbs and spices

Cappelletti – Cook for 3 to 7 minutes.

Squares of dough filled with cheese (or, rarely, meat) and closed to form a small hat (cappello=hat). In the large majority of Romagna the filling is made by a mixture of parmesan and soft cheese.

Both the pasta and the broth take some time to make, but each can be made separately, stored and brought together when needed. If you plan on making this all in one day, do it on a weekend. Serve this either as a light dinner or as an elegant combination of a soup and pasta course in a larger meal, ideally right before a main course or meat or fish. Vegetarians, you can make this recipe with a mushroom broth instead of a meat broth and it will be every bit as good.

Mezzelune, also known as Schlutzkrapfen in South Tyrol, Tyrol, and neighbouring German-speaking regions, are a semi-circular stuffed pasta, similar to ravioli or pierogi. The dough is usually made of white flour or buckwheat flour, durum semolina, mixed with eggs and olive oil

The recipe for a delicious Italian stuffed pasta: Taleggio and Walnut Mezzelune with Parmigiano Reggiano Fondue.

Half moon shaped egg pasta that is small in size and stuffed with any of a variety of ingredients. Initially made as a round circle that is folded over and sealed around the edges, Mezzaluna pasta may have fillings such as meat, cheese, fish, herbs, spinach greens, squash, or other similar foods and topped with a cream sauce.

* Not enough time or confidence for making pasta dough?  Try using wonton wrappers rather than make your own dough, for a great shortcut.

Triangular shape with a bulging center, does not contain meat