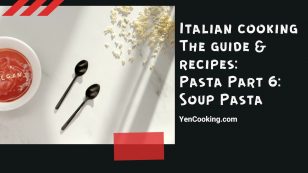 Acini di pepe are a form of pasta. The name is Italian for “seeds of pepper”. Acini is the plural of acino whose root is the Latin word acinus. In both Latin and Italian, the word means “grape” or “grape-stones”. The “stones of a grape” are, of course, the seeds of the grape.

A light soup that is full of flavor and easy to make.

Alphabet pasta, also referred to as Alfabeto, is a pasta that has been mechanically cut or pressed into the letters of the alphabet. It is often served in an alphabet soup, sold in a can of condensed broth. Another variation, Alphagetti, consists of letter-shaped pasta in a marinara or spaghetti sauce

This beyond simple alphabet soup recipe is always a huge hit! Only 3 ingredients needed, this recipe only takes 20 minutes and is perfect as a quick, weeknight meal for the family

Anelli are small, thin, rings of pasta. They are generally used for soups and pasta salads. A smaller version of anelli is anellini, which is about one-quarter of the size.

Orzo, also known as risoni, is a form of short-cut pasta, shaped like a large grain of rice. Orzo is traditionally made from white flour, but it can also be made of whole grain. The name orzo is common for this pasta shape in North America, and less common in Italy

This Creamy Garlic Parmesan Orzo can be on your table in 15 minutes! While it’s perfect as a side dish, I prefer this as a meal on its own because it’s cheesy, creamy and really hits the spot.

Fregula is a type of pasta from Sardinia. It is similar to North African Berkoukes and Middle Eastern Moghrabieh. Fregula comes in varying sizes, but typically consists of semolina dough that has been rolled into balls 2–3 mm in diameter and toasted in an oven

This fregola with clams is a delicious and easy way to use fregola, a toasted round Sardinian pasta.

Ptitim is a type of toasted pasta shaped like rice grains, little balls, or multiple other shapes developed in Israel in the 1950s when rice was scarce. Outside Israel, it is typically marketed as Israeli couscous, Jerusalem couscous, Giant couscous or pearl couscous

Ditalini is a type of pasta that is shaped like small tubes. It has been described as “thimble-sized” and as “very short macaroni”. In some areas it is also called “salad macaroni.” During the industrial age in Apulia, Italy, increased development of ditali and other short-cut pastas occurred

Torta di Ditali or otherwise known in Italian cooking as Ditali Pie, is pasta combined with ground beef, tomato sauce and eggs; then cooked in a pie crust.

Small star shaped pasta that contains a hole through the center of the star.

For anyone else who loved Chicken and Stars Soup as a kid like I did, here is the all-natural homemade version that tastes even better! Plus it’s quick and easy to make, and so delicious.

Small tubular pasta, which are similar to ditalini pasta only slightly longer in length